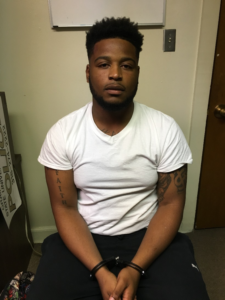 An arrest has been made in reference to the double homicide that occurred on the campus of Grambling State University that claimed the lives of Earl Andrews and Monquiarious Caldwell. Jaylin M. Wayne has been arrested and charged with 1st Degree Murder in connection to the shooting deaths of Andrews and Caldwell. Andrews and Wayne were both GSU students. Wayne was taken into custody insert the date, time and location of arrest here.

LPSO investigators secured an arrest warrant for Wayne after gathering vital evidence and conducting extensive interviews of witnesses and other involved persons concerning this tragic ordeal.

The investigation revealed that this incident was apparently initiated as a result of a disagreement that led to a fight between one of the victims, Earl Andrews and the suspect. At some point during the fight, the suspect produced a firearm and shot Andrews and Caldwell. Caldwell appears to have been coming to the aide of Andrews when he was shot.

To the students and family members / parents of our GSU students here in Lincoln Parish, please rest assured that President Gallot and I remain in close contact, increased activity / patrols will continue for the foreseeable future.”